TL;DR: I’m running a big race, and I am asking you to support me here in order to give me the peer pressure I need to actually run this thing (…aaaand it also helps an amazing cause). Plus, I’m putting the FUN in fundraising by offering some cheeky perks and privileges for those who donate more than a certain threshold (see “How I’m Fundraising” below).

I could BS you and say that this is all about the kids (more on that later) but this is entirely a personal challenge.  As I try and build and live my life according to my personal values, I am making a conscious effort to grow into the type of man I always I hope I would be “when I grow up”, which includes a vision of how I look, prioritizing a healthy lifestyle, and continually striving to push my personal limits.

I have a list of goals I want to achieve in my lifetime, and graduating college and entering the workforce has made me realize that if I don’t take action now, I never will. Losing weight is a goal that I am entirely in control of, and a marathon (particularly through the heart of my favourite city) is a wonderfully tangible goal I can work towards with a set deadline and no capacity to lie to myself: either I run 26.2 miles in under 4 hours, or I don’t.

Furthermore, the transition from campus life to an office environment that tends towards a monotonous routine (despite the work itself being interesting and varied) has made me value the side projects and experiences that help me live a rich life. I have often found that challenging myself in an area outside my comfort zone is what makes me happiest (see my previous blog post reflecting on 2015), and there is nothing further outside anyone’s comfort zone than Ross Garlick running a marathon.

It’s not just about those 26 miles…

The beauty of a marathon is that if you don’t train, you won’t finish. To date I have run two half marathons which were both immense challenges, the successful completion of which gave me the belief that I can run the full marathon, but almost anyone in decent health could run a half marathon with some bare bones training. A marathon is an entirely different beast: in order to succeed I will need to have run at least 7 or 8 half marathons (and longer), weekend after weekend.

Let me put it in more context. I’m currently averaging 9-12 miles per week (more info in update #1 below); I will ultimately be running 2-3x that distance in a single morning. I don’t think I have ever done anything (apart from sleep) for 4 hours straight, but I am planning on running for as long as it would take someone to drive from New York to Boston, or for someone to take a train from London to Manchester… and back again.

In 2016 I am anticipating running 600+ miles – 10-15 miles per week for 30 weeks, 20+ miles per week for 15 weeks. I could run up to Chicago or down to Charleston, South Carolina in that distance. I’m both nervous and excited at the prospect of taking 10+ mile runs to areas of NYC as far flung from Williamsburg as Coney Island or the West Side Highway, of zigzagging across bridges and between boroughs.

What is Team for Kids?

I’m running this marathon for Team for Kids, the charitable arm of the New York Road Runners, and as a result I am asking you for donations (here :) ). Why Team for Kids, you ask? Well A) running for Team for Kids and raising $2,620 is the only way to get guaranteed entry into the race unless you have a Paula Radcliffe-esque qualifying time (which I do not) and B) having decided to run for Team for Kids as a way to get into the marathon, I have discovered that it is actually an awesome charity. With a 4 star rating on Charity navigator (the top rating), Team for Kids has demonstrated success at leveraging events such as the NYC marathon for helping inner-city kids have an outlet for running (by making a fun and friendly running instructor available to every public school in NYC) and hosting a plethora of community 5K’s etc… that encourage healthy lifestyles and community engagement. I spent a lot of time researching Team for Kids before deciding that I was comfortable wearing their shirt as I run the marathon.

I understand that pretty much everyone reading this is only thinking about donating because it is me running, rather than for the cause itself (THANK YOU), but I hope you will take my word when I say that this is a worthy cause to support.

Here’s the fun part: I want to make this experience as fun and memorable as possible, including the way I go about fundraising. So I’m going to do a Kickstarter-esque perk system for those who donate to my marathon! And without further ado…

Here’s your first taste of what to expect from me on a monthly basis. I know you are all cheering me on…

This whole marathon endeavor first felt real when I received my LG G4 armband and I signed up to Runkeeper, in December. That was the first acknowledgement that this isn’t going to be a jog in the park (the irony being that the marathon will finish in Central Park).

And until 2 weeks ago, when the weather dropped below freezing everyday and a massive snowstorm hit New York, I was actually doing a decent job (I think). Below is the number of miles ran each week since the start of December:

Below is a sample of the traditional loop I run on the weekday mornings, which I really enjoy – I run up to the park as the sky changes from night to dawn, then head back South down Kent avenue to see the sun first hitting Manhattan. Finally, I run up the hill on Broadway, past my Yoga studio (where I sometimes glance in the window to see KC in Eagle pose), and back home. 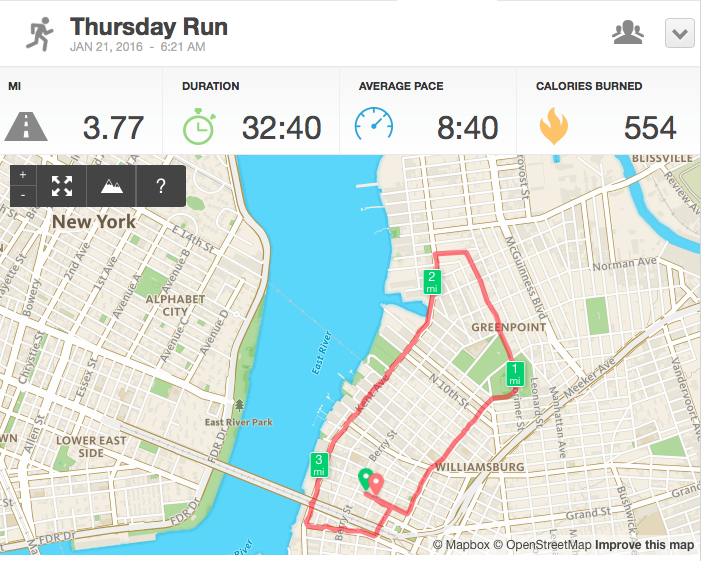 I typically average around 8:45/mile, which has already been steadily improving from the 8:50 range to the low 8:40s. To run my marathon in sub-4 hours, I only need to average ~9:15/mile, but it is a different beast running 4 miles and running 26.2!

The furthest I have ran so far is 6.89 miles, on Saturday January 16th (the morning after my 24th birthday!). I actually felt pretty good at the end of the run, and I’m hoping to take the next “long run” to 8 miles this weekend. 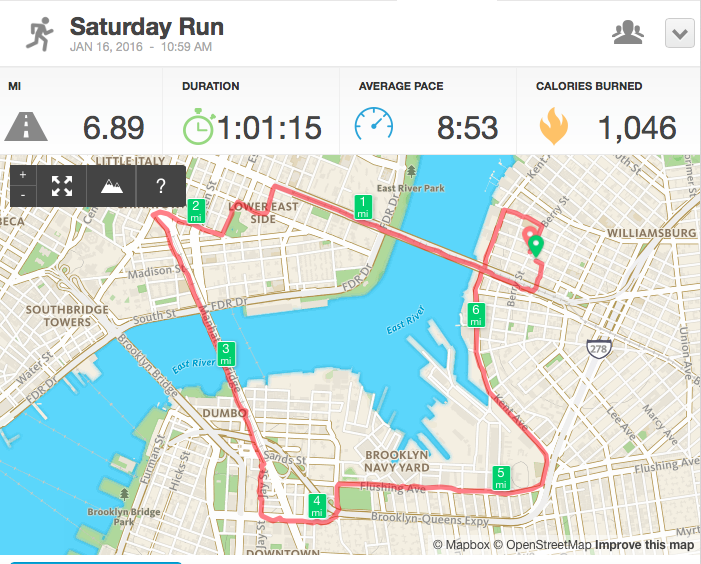 So that is my Marathon Update #1!! Please get donating here and the next update could be dedicated to you, or my next run could send me wherever you want me to go!

I ramble semi-often, but now its time to run!