Let’s face it, the Bronx is cool. No, it’s not Manhattan and no, it’s not Brooklyn; but when the former is seeing a corrupt Chinese official’s wife buy a $6.5 million apartment for her 2 year old daughter, and the latter has Hipsters who are fed up with Hipsters, why would the Bronx want to imitate them?

The Bronx is gritty, often dirty and far from many people’s idea of paradise, but it is so alive. The hustle of the subway vendors and performers, the bustle of shoppers on Fordham Road, the perpetual concordant babble of conversations in Spanish and English and more: the Bronx is a hive of constant activity.

The Bronx has been rebuilding for 30 years, following the infamous “Bronx is Burning” era. Much has been done since then, but we are only at the start of a true Bronx Renaissance. The borough’s rich diversity, low cost of living and fierce pride offer a potent platform for growth, if supported by political and economic muscle. The seeds have been sown, and the over-stereotyped, under-appreciated borough is just beginning to see the green shoots of a prosperous future. 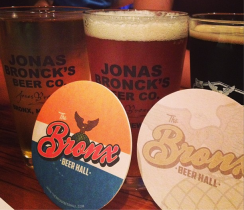 My first port-of-call must be The Bronx Beer Hall, a Belmont establishment that represents all the potential that exists in the borough. Opened in February 2013, the Beer Hall is a craft beer bar situated at the heart of Arthur Avenue Retail Market. The introduction of a contemporary bar in the midst of a 1940’s old-school grocery market sounds like a culture clash that could end in disaster, but it couldn’t be farther from the truth: The Bronx Beer Hall integrates itself seamlessly, breathing life into an aging Italian market and in the process creating a unique bohemian destination. The juxtaposition of the old and the new is paralleled by the demographics of the owners: The Bronx Beer Hall was founded by two young and ambitious Puerto Ricans, Paul and Anthony Ramirez, but supported by an Italian, David Greco, whose family has been involved in the area since 1922. Only the best local and regional brews are served by knowledgeable and friendly bar staff, and among a crowd of Fordham students, Bronx residents and the occasional Manhattanite, it is impossible not to have a good time. The Beer Hall has added a Bronx twist to the best Manhattan and Brooklyn has to offer, in the process usurping them. I would go so far as to say that the Beer Hall is the best craft beer bar in New York City. Try it for yourself, and I promise you will understand.

Complementing the arrival of The Bronx Beer Hall has been the emergence of an impressive micro-brewing industry in The Bronx. The Bronx Brewery has emerged as a high-quality brewery in the Port Morris area of the South Bronx, and their signature (and delicious, I might add) Bronx Pale Ale is beginning to find a home amongst the many taps of New York City’s bars. Jonas Bronck’s Beer is brewed in homage to the Swedish settler after whom the Borough is named, and their Pelham Bay IPA is my go-to poison of choice at The Bronx Beer Hall. Yonkers Brewing Company, though located just outside of the Bronx, also has a strong connection to the area, and produces a fine toasted lager. The Bronx isn’t burning, it’s brewing!

Beer isn’t the only sign of change in the Bronx, however. As unlikely as it sounds, the Bronx is fast becoming a hub for sustainability and technology. Organisations such as Sustainable South Bronx are addressing both environmental and economic problems by training Bronx residents of the impoverished South Bronx for skilled careers in Green Roof installation, Solar Photovoltaic Technology and Sustainable Building Science. The Green Bronx Machine takes the Triple Bottom Line approach to the next level, educating school children to build edible walls, thus providing job training, a profitable, sustainable business and home-grown fruits and vegetables for the nutrient-deprived South Bronx. Take the time to watch Green Bronx Machine founder Stephen Ritz’s TED Talk, I dare you not to be impressed. Startup Box South Bronx and the Sunshine Bronx Incubator are aiming to expand New York’s burgeoning tech startup scene across the Harlem River by providing a location and platform for students, startups and community members to get involved with Tech in the Bronx. Even Fordham University are helping to foster entrepreneurship in the North Bronx with the launch of the Fordham Foundry, open to both students and members of the local community.

As if that wasn’t enough, a landmark development proposal to convert the Kingsbridge Armory into the world’s largest Ice-Skating and Hockey complex is sure to raise the pulse of the community. The proposed $275 million renovation would hold a 5,000 seat arena as well as nine other year-round ice rinks, and could draw an estimated 2 million tourists every year. The development emerged after a proposal for a shopping mall fell through, with a community backlash demanding that the Armory focus on community enhancement rather than creating a few minimum-wage jobs and increased traffic congestion. The New York Times quoted a local resident as saying “People need jobs, but they don’t need chump change. This building belongs to the people in the area.” It looks like that desire for a better community is paying off; a development on the scale of the Kingsbridge National Ice Center would certainly fulfill the role as a community education and leisure hub, and serve as a foundation for cultural and economic growth for years to come.

The striking thing about the ongoing development of the Bronx is that (thus far) it has not brought with it the negative aspects of gentrification that have afflicted other New York communities that have witnessed rapid economic growth, such as Brooklyn and pockets of West Harlem. There has been no mass invasion of young professionals to drive up rents and force residents out of the area. The silver-lining to being over-stereotyped and under-appreciated may be that the Bronx has a chance to develop largely under the radar of the press. While the Bronx still has a long way to go, it can to raise the living standards and income of all without betraying its current residents or compromising the traditions and values that make it what it is today.

The Bronx is on the verge of shrugging off its image as a place of poverty and violence, and in the coming years the area will begin to emerge as a world-class home for culture, technology and prosperity. The Bronx presents huge opportunities to those who can see the borough’s potential for what it is. In the coming years I will be working to make those opportunities become realities.

In the meantime though, you can find me sipping a Pelham Bay IPA in the best beer bar in the city.

P.S. Anyone who shares the same passion for the Bronx that I do can join and follow the conversation on Twitter with the hashtag #thebronxdoesitbetter.

One thought on “Welcome to a Bronx Renaissance”