“Sometimes you have to go up really high to understand how small you really are.”

Just 20 minutes before I was due to give a presentation on the Opportunites for Entrepreneurship at Fordham University, I was yet to shower or even practice my speech. The reason? I was too captivated by an Austrian unbuckling his seatbelt, climbing out of a tiny capsule attached to a 55-story balloon, and leaping out from the edge of space.

Felix Baumgartner’s historic 128,000 ft freefall lasted just short of 10 minutes, but it was the culmination of years of hard work and determination. 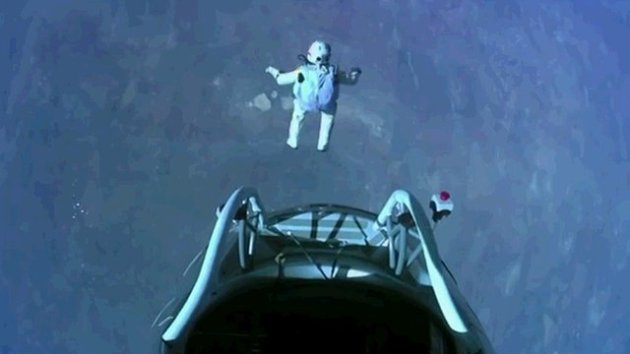 I don’t know if it was the coincidental timing of these two events, or the sheer audacity of Baumgartner’s dive, but I immediately connected some of the attributes around this special event with some of the skills required to become an entrepreneur.

The more I thought about it, the more I saw the similarities. Embracing calculated risk, riding an emotional rollercoaster, accepting delayed gratification: these are some of the qualities that describe many entrepreneurs. Inspiring millions and pushing the boundaries of what was thought to be possible: those are the qualities of visionary leaders and entrepreneurs, and yesterday Felix Baumgartner joined their ranks.

Though 8 million people watched Baumgartner’s 2 and a half hour ascent and 9 minute descent with abated breath (myself included), the daredevil knew the risks he was taking. With over 2500 skydives in an illustrious career renowned for spectacular stunts, Baumgartner has a better knowledge of the physics of freefalling than almost anyone else on the planet. Possibly the one man who knew more about diving from the edge of space was Colonel Joe Kittinger, the man who’s 52 year old record of falling from 102,900 ft was shattered on Sunday, and he was the man Felix chose to mentor him over the 7 year build up to Sunday’s successful attempt at making history. That delayed gratification is part of what separates the great from the good, and Felix was surely gratified upon achieving his goal yesterday.

Calculating risk is also an important part of starting one’s business, with the SWOT analysis being one of the most fundamental building blocks to any business plan. Former NASA flight surgeon, Jonathan Clark, was part of Baumgartner’s team, and he outlined some of the risks Baumgartner would face during his dive: extreme cold, the near-vacuum of space, the risk of an uncontrolled flat spin, drogue chute failure, spacesuit puncture, life support systems failure. Even as Baumgartner ascended to the heavens, it appeared that a malfunctioning heated visor could blind the diver as he fell through the freezing air, showing that risk is always present. But Baumgartner and his team were as prepared as possible for these risks.

“We have run hours of tests in vacuum chambers, we are finessing life support systems, and monitoring his systems during the dive, calculating what he will need during the plunge back to Earth to survive,” said Clark back in February. “We are rehearsing this over and over, and will do tests from 60, 000 feet and 90,000 feet.” Sounds kinda like an entrepreneur conducting A/B testing and producing a minimum viable product before going all-in, doesn’t it?

But Felix Baumgartner’s best trait might just be his capacity to inspire, just as the greatest leaders and visionaries before him have.  Emotions that have probably not been felt since Neil Armstrong’s moon landing were stirred into life as Baumgartner professed, “sometimes you have to go up really high to understand how small you really are,” with the whole world in front of him.

Personally, it felt like a once in a generation moment, and I know that I have certainly been inspired to push harder; to never back down when someone tells you what you are attempting is too hard; to reach for the stars (no pun intended).

You may be afraid of heights, but Felix Baumgartner’s groundbreaking freefall was much more than a skydive, it was an awe-inspiring reward for one man’s dedication and determination to succeed. There’s a lesson there, so take heed.